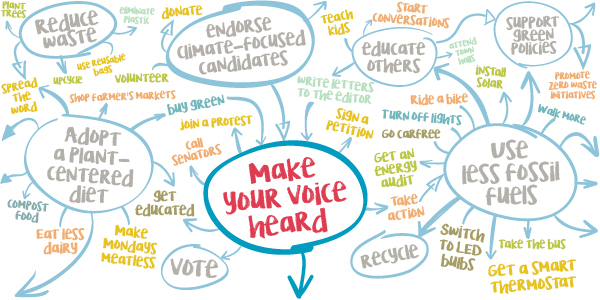 The American Humanist Association (AHA) created the HERE for Climate project in April 2019 to focus on educating and inciting action for the climate. Most humanists are aware of the scientific consensus that the climate crisis is a global threat to the earth, but recognition of how it affects communities requires continual development of awareness. Continual growth in understanding, as well as identifying adaptations of our actions, is key for taking on climate change. HERE for Climate provides resources to help members further this work.

Environmentalism is a word often heard in this time of concern about the Earth’s changing climate, as it is a response to climate change, the scientific phenomenon that impacts Earth’s patterns. If you are familiar with the AHA’s Ten Commitments, then you know that Environmentalism is one of those commitments. The word often invokes images of polluted rivers or loss of habitat for polar bears. These images are real, but climate change is also a humanitarian crisis. Its impact on Earth’s systems is significant, but how does it affect our communities, presently and in the future, living within these systems? Environmentalism is an intersectional topic that stretches far beyond caring for the planet. It reaches into other humanist commitments: Peace and Social Justice, Empathy, Global Awareness, and Responsibility.

Environmentalism stretches beyond making the planet healthy. It requires the commitment to making people healthy and creating a more just and equitable society while deconstructing what has put the earth and those most vulnerable in danger. Climate change is a threat to the health of people and a social, economic, and racial threat.

When it comes to climate change, communities of color and low-income communities bear the most intense effects but contribute the least to the problem. This is the case throughout the globe. Tuvalu, an island nation located in Oceania, and its people are bearing the brunt of climate change. The country has seen rising air temperatures, more intense and frequent storms, a decrease in rainfall, and disappearing shorelines. These consequences of climate change are forcing the people of Tuvalu to make the difficult decision to stay or to go. In Haulover, Nicaragua, land is disappearing—a consequence of more frequent and intense storms. The people of Haulover are also forced to ask themselves the same difficult question: stay or go?

As areas become less habitable due to the effects of a changing climate, climate refugees are migrating to protect and support themselves. Migration between countries is a contentious topic, especially in the United States, and the ravages of climate change make the situation worse. Acknowledging the global effects of a changing climate, including those that are not happening at our own doorstep, is important. Climate change is a global phenomenon, and it’s necessary to think globally when it comes to protecting communities outside of our own.

Empathy requires putting yourself into another person’s perspective. Whether it is your next-door neighbor or someone across the globe, every person has unique experiences. Although climate change may not be dramatically affecting your life, it is dramatically affecting lives all around the world. Empathy opens our minds to those around the world, but it’s pertinent that the acknowledgment turns into action.

Humanists have a responsibility to care about others. As climate change is an issue with a variety of impacts, responsibility also takes on many forms. To support continued learning and provide information, HERE for Climate has resource guides, tool kits to living sustainably, and a recorded speaker series to help you understand why climate change is happening and who it is affecting. One of the most important things you can do once you have that knowledge is share it. Research shows that talking about climate change with others reinforces the reality of the climate crisis.

This week, HERE for Climate is launching a social media campaign. Submit a post about how you are showing up to be #HEREforClimate and inspire action. Small changes to your daily routine, an Instagram post, or passing conversations may seem fleeting, but change must start somewhere.