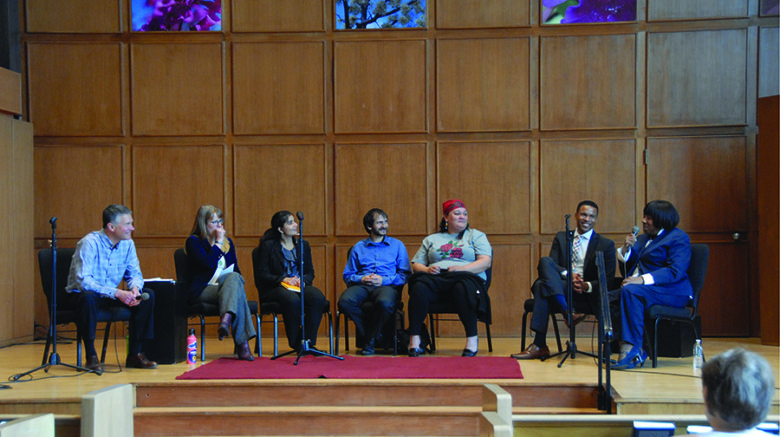 Last Saturday the American Humanist Association’s Center for Education hosted “Climate Justice: A Better Future for Us All,” the latest in its open lecture series. Held at the First Unitarian Society of Minneapolis, the event featured predominantly Minnesota state and regional experts on sustainable agriculture and energy, as well as those working in the fields of health and environmental policy. The intersectionality of poverty and inequality with climate change was the overriding theme, as was the idea of resilience and action. Six keynote speakers and a panel of inspiring high school climate activists combined to present Minnesota as a model for climate policy and action that prioritizes social justice.

The first speaker, Bailey Webster, has a background in horticulture science and organic/sustainable agriculture, and she’s worked on both non-profit and for-profit vegetable farms. She is currently the food hub director for the Hmong American Farmers Association (HAFA). The Hmong people originated in China and migrated to Southeast Asia to escape conflict and genocide. Hmong refugees from Laos began to settle in Minnesota (as well as Wisconsin and California) in the 1970s and are a large part of the vegetable farming sector in the Twin Cities, selling wholesale at farmer’s markets. Webster spoke about the challenges Hmong farmers have faced along with successes of the approximately 400-member HAFA collective. One of the takeaways she imparted for individuals: go to farmer’s markets when it’s raining. Farmers have to take home what they don’t sell, and if no one goes to outdoor markets on rainy days, the farmers come up very short on sales.

Ben Passer is the director of energy access for Minnesota-based Fresh Energy, and he also supports the company’s diversity, equity, and inclusion efforts. A lawyer with experience in state politics, he spoke about a Green New Deal, both the need for it and the expansive work happening now in the absence of one. He cited the 100% Campaign, described as a “cross-sector, statewide, multi-racial, intersectional campaign to build an equitable clean energy economy that works for everyone in Minnesota.” Their slogan: “To change everything, we need everyone.”

Evoking the twin crises of inequality and climate change, of “poverty and pollution,” Passer explained the concept of an individual’s so-called energy burden. He noted that lower-income people spend more on energy needs and that the burden is higher for renters than home owners. This is in part because homeowners are positioned to invest in energy efficiency in their homes, whereas renters don’t have that power, and people with less income just don’t have the capital to do so.

Catherine Fleming is an IT professional involved with a number of environmental groups and initiatives in the Twin Cities, including light rail extension, the City of Minneapolis’s Green Zone Task Force, the Environmental Justice Coordinating Council, and Project Sweetie Pie—a gardening program in schools promoting urban farming, youth development, and access to healthy foods that started with students growing sweet potatoes that were sold to a baker for pies (hence the project’s sweet name). Fleming talked about the food desert that makes a McDonald’s Happy Meal more affordable than buying an orange in parts of North Minneapolis. She talked passionately about students’ cathartic embrace of farming and growing, and noted that crime rates had dropped among the student populations that were involved in the project.

Mysti Babineau gave the fourth keynote as the climate justice organizer for MN350 and Honor the Earth’s legislative liaison to the Indigenous and People of Color Caucus in the Minnesota state legislature. Babineau spoke extemporaneously with a mix of heartbreak, gravity, and hope for the land she is so deeply tied to. “It is in my DNA to fight for and think about the seven generations to come,” she said, stressing that the health of communities is directly proportional to the health of the planet. She made stark connections between the two, pointing out how the fossil fuel industry contributes to sex trafficking when constructions workers are brought from out of state to work on oil pipelines. Separated from family for long periods of time and with money to spend, the demand for drugs and sex spikes. What happens, Babineau shared, holding back tears, is that Native women go missing. Still, she said, “there’s so much more good in this world than darkness.” Her message to kids: “There is nothing you can’t do.” To marginalized communities: “Your time is coming.”

Timothy DenHerder-Thomas is the general manager of Cooperative Energy Futures, which develops community solar gardens to help families reduce their energy bills by offering solar at no upfront cost. He’s the cofounder of Grand Aspirations, supporting teams of youth innovators working on green solutions in their communities, and he’s active with Community Power, a Minnesota coalition that secured the nation’s first city-utility Clean Energy Partnership in Minneapolis. DenHerder-Thomas spoke about the need to challenge the monopolies public utilities enjoy to the detriment of consumers and the environment, citing community solar plans as one vital component of an “economy that doesn’t require burning stuff.” He also touched on the need for humans to rethink our relationship with our energy sources and uses; instead of expecting power whenever we want it and with the flip of a switch, for example, we can learn to use power when it’s available. He made an interesting observation about how status affects people’s thinking on climate change, noting that those who enjoy privilege aren’t in touch with dark emotion in the same way that marginalized communities are—that loss, grief, chaos, and fear are familiar to the poor. “There is so much power in sharing your power,” he told the audience. “In sharing your privilege.”

The final keynote speaker was Dr. Laalitha Surapaneni, an internal medicine specialist at the University of Minnesota Medical Center, board member of Chesapeake Physicians for Social Responsibility, steering committee member for the 100% Minnesota campaign, and a member of Health Professionals for Health Climate. Surapaneni has testified before the Minnesota legislature and in Maryland when she was doing graduate work at Johns Hopkins, and she’s lobbied at the federal level on the link between climate change and a range of health problems. In her keynote, she addressed the fact that low-income people are hurt the most by the effects of the climate crisis. For example, higher temperatures mixed with pollution create more ground-level ozone, which triggers asthma and other respiratory problems. People living closer to factories and who spend more time outdoors, either working or avoiding stuffy air inside, will suffer more. Lower-income people may also not be able to afford inhalers and other treatment. Surapeneni also talked about how climate change disproportionally affects the poor on a global scale.

After their powerful presentations, all six speakers sat as a panel and continued the conversation about the growing convergence of environmental and social justice movements. I personally have never experienced a panel that was so intersectional, so evenly contributory, and, it bears repeating, powerful. Talking to the speakers at lunch, they expressed a similar appreciation, both for their colleagues’ specific expertise and the cohesiveness of the climate justice theme incorporated into each talk. They credited the AHA Center for Education, namely Director Kristin Wintermute, for bringing them all together and for clearly articulating that theme. Echoing the 100% Campaign, to change everything, we need everyone. “Climate Justice: A Better Future for Us All” was a model of this very idea, and I encourage everyone to tune into the event when it’s available at the AHA Center for Education in the coming month.