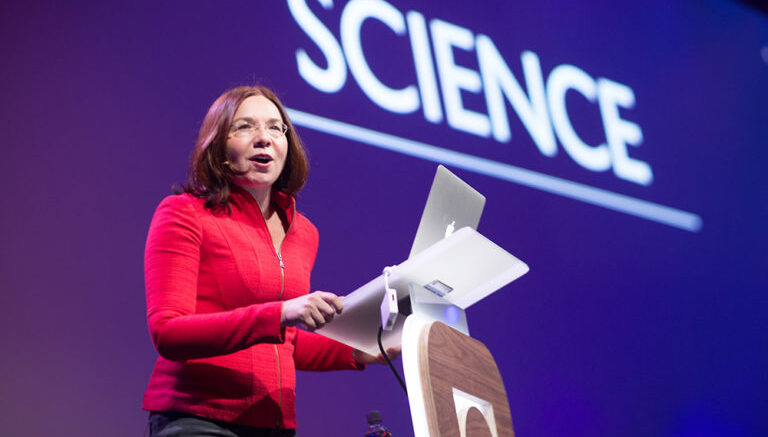 I’ve always been genuinely impressed with Dr. Katharine Hayhoe’s calm and reasoned approach to explaining the science of climate change—or as she calls it, “global weirding.” Weather patterns are indeed getting strange, like a record-setting 100-degree day in Siberia on June 20, 2020. But weather is different from climate, the atmospheric scientist who runs Texas Tech’s Climate Science Center reminds us.

In each video she produces, it’s just Hayhoe and some unassuming graphics or cartoons with playful sound effects. She threads the needle and avoids hyperbole while she explains the severity of the human-induced climate crisis. She doesn’t pull punches when talking about the impact it’s having and will continue to have on the planet. Somehow her tone is never accusatory, never condescending, just, “hey, all the data is really clear about what’s happening with global climate. It’s changing quickly, it’s bad, we ought to act, and this is how we change our course.”

Topic by topic Hayhoe explains what specifically is weird about the changing climate. There are videos on the rising averages in global temperatures, causing worldwide changes in regional climates and levels of precipitation. Regions are highlighted that are experiencing droughts for the very first time, along with agricultural regions that are losing the fight to keep producing crops because of changing climate patterns. (The general public can find her videos for free on PBS.)

In short, Hayhoe’s communicative ability makes her easy to follow and her approach makes the all-too-often contentious subject of climate change palatable to a wide audience. The remarkable thing is that she frequently makes it a point to note her evangelical Christian faith.

As a believer who isn’t shy to express her belief, Hayhoe is in a unique position to introduce the important conversation on climate to the difficult-to-reach conservative Christian crowd. It did surprise me to learn that it surprises Dr. Hayhoe when people question her choice of career given her strong religious affiliation. The aversions that dogmatic believers have to scientific claims are hardly a new phenomenon.

The example of Nicolaus Copernicus comes to mind. His novel astronomical calculations threatened to reorient conceptions of the universe that contradicted the many references to geocentricism in the Christian Bible. And while some scholars argue that Copernicus’s views weren’t opposed by the church while he was alive, that contradiction got his writings posthumously condemned by Protestants and banned by Catholics for over 200 years. Some attribute that ban to Martin Luther’s reassertion of the biblical inerrancy of geocentricism. That obviously wasn’t the last time the church would resist science.

Galileo Galilei’s life, even more so than that of Copernicus, was an epic battle for reason and science. His antagonists were the Protestant reformers and the Catholic Church as well. For championing empirical observation over dogmatic reliance on religiously based interpretations of the natural world he was condemned as a heretic. His inquisitors infamously forced him to recant his godless, heliocentric heresy.

In spite of this long history (with which she’s certainly familiar), it surprises Hayhoe that people wonder how she balances these historical, even psychological contenders. I’ve even noticed a sense of amusement at the idea that someone would think that there could be a conflict.

In a July 29 interview with Elaine Howard Ecklund, director of the Religion and Public Life Program within Rice University’s Social Sciences Research Institute, Hayhoe clarifies her thinking. In studying scientists’ perceptions of religion, Ecklund states that many believing scientists are doing more than just fixing technical problems and employing reason and the scientific method to develop an understanding of natural phenomena. They’re on a mission from God. Instead of correcting this assertion, Hayhoe. agrees with her interviewer.

Eklund goes further. A major theme of her new book, “Why Science and Faith Need Each Other,” is that issues like climate change aren’t merely the result of bad political-economic policies and bad actors in the chorus of anti-environmental industries. She claims that this planetary crisis is ultimately the result of sin. Again, I hoped for the interviewer to be reeled in, but Hayhoe emphatically affirms that premise by saying, “I love that, that’s so true.”

“Shalom” is the title of the video interview, and in it Eklund explains the Judeo-Christian concept of shalom—which in Hebrew can mean peace, harmony, wholeness, etc.—as it applies to the practice of science. It’s the mission from God that Christians who are scientists get to take on. Shalom is the believers’ crusade against the effects of sin. More specifically, Christians who are scientists trying to cure cancer or solve the climate crisis are working to make the world whole again. Their mission is to restore the world to the way God made it.

Which brings us to my question: How weird is Hayhoe’s climate science? The word “weird” can simply mean strange, uncommon, or unusual. Or it can be “suggestive of or relating to the supernatural.”

This latter definition, in context of the interview, sheds new light on the nature of Hayhoe’s understanding of—as well as her underlying approach to—the climate crisis. It seems to be the case that Hayhoe chose an occupation where she can do more than just examine data related to the physical effects of greenhouse gases. More than just communicate those important scientific findings to the rest of us. She has set her sights beyond the scientific problems. That worries me a lot.

Solid science can be derailed in so many ways. From the political economics involved in deciding which research gets funded, to the interpersonal dynamics of which voices get heard when discussing the research once it’s funded, right down to the individual motive to advance one’s own career more than find the most plausible answer. These can all overshadow, even extinguish, the pursuit of empirical knowledge. To hear such a phenomenal communicator and scientist acknowledge that she’s driven to do her work by supernatural forces confounds me.

What drives her to save the planet from climate crises, it would follow, is not the illogic of allowing sea levels to rise (killing billions of people), in and of itself. The drive to reduce greenhouse gasses is not to decrease the starvation that will occur when increasing rainfall destroys global food supplies, for its own sake. For Hayhoe the impetus to act is to mitigate the effects that original sin has brought to bear on God’s creation.

As a humanist, I have to ask myself whether I care. If Jiminy Glick pushes a stroller out of the way of a speeding taxi in pursuit of a Boston cream donut, the baby is saved regardless of his motives. Sure, I’d prefer a heroic motive, just like I’d prefer science to be driven entirely by a perfect mixture of empathy and reason. From what I’ve heard of her, Katharine Hayhoe’s message never lacks empathy. This interview was the first time I’ve questioned whether her work was driven by reason.

I contacted Hayhoe in August of 2019 when US Rep. Alexandria Occasio-Cortez (D-NY) was being lauded and lambasted for her proposal of the Green New Deal. I reached out to Hayhoe through her Facebook page asking whether she supported the legislation. Looking back, her response was perfectly consistent with what I would hope to hear from a reasonable scientist who is an evangelical. Reviewing her answer allayed some of my fear:

As a scientist, I support any legislation that will reduce carbon emissions. As a Christian, I support legislation that will help people, especially the poorest and most vulnerable who spend more of their money on energy and are disproportionately impacted by a changing climate. As a Canadian, I do not endorse specific policies from other countries other than to comment on whether they will or will not reduce carbon emissions.

The important thing I’m brought back to is that Hayhoe is capable of bringing a critical message to an audience whose ears are zealously guarded by their religious leaders. The quality of her work still speaks for itself. She is talking about the realities of climate change that are driven by data that has convinced her. “Global weirding” may be couched in some hocus-pocus eschatology, but it’s sparking a new dialogue where silence and denialism have ruled the day.

As a humanist I can’t deny the value of that. We need as many evangelicals on the side of correcting climate change, or “global weirding” as possible. Achieving that evangelical buy-in won’t come from influencers outside of the faith.

I hope that she’s successful. Voters, engineers, and investors in the churches where she’s allowed to speak get the chance to learn. The more listeners learn about the science, and heed her warnings, the better off we’ll all be. If I were a believer who was on the fence about “global warming, or whatever they call it now,” then I think she might be able to convince me. Humanists need to hope that the dialogue she’s uniquely able to engage in, like her conversation with the actor Don Cheadle in the Years Project episode “Pray for Rain,” continues.