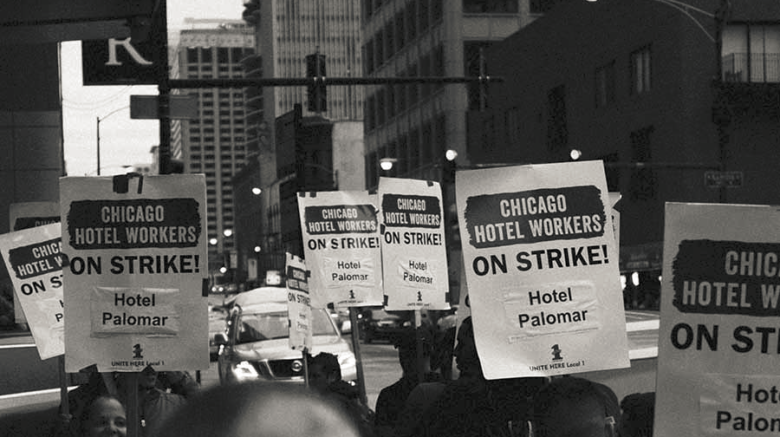 In February 2017, workers around the United States participated in a day-long strike, “A Day Without Immigrants,” to showcase their contributions to society in the face of anti-immigration actions being taken or proposed by the Trump administration. Restaurants and other businesses closed due to a lack of staff or in solidarity with striking workers. In 2018, teachers in West Virginia effectively shut down the state’s public schools to protest low pay and high health insurance costs at the state house. Teachers in other states, including Oklahoma, Arizona, Colorado, North Carolina, and Kentucky, followed suit. In early 2019, McDonald’s workers took to the streets for a day to protest sexual harassment and to advocate for a $15 minimum wage and the right to organize the workforce. At this very moment, miners in Kentucky are blocking a railroad track preventing rail cars with a million dollars of coal on them from leaving Harlan, Kentucky, until the miners receive their unpaid wages. And on Monday some 48,000 members of the United Auto Workers walked off the job at GM plants around the country to strike for better pay, benefits, and job security.

These are just a few examples of direct action from a long history of labor strikes. These strikes, where people use their labor and their bodies as bargaining tools, have worked to reduce the inequity between the average employee and management in the American workforce. Over the last 150 years, direct action by labor has advanced women’s and immigrant’s rights; improved workplace safety; prioritized civil rights; and improved working conditions, including reducing the average workday, increasing wages, and providing retirement benefits.

In fact, direct action is so effective that corporations have worked tirelessly to reduce the power of labor unions. Employers are now able to permanently replace striking workers in some circumstances. They’ve successfully pressed for “right to work” laws that require unions to provide services to non-paying employees, forcing unions to allow freeloaders the benefits of membership and destroying group cohesiveness. Kentucky’s Labor Cabinet—the state organization that should support the workforce—has threatened teachers with fines for engaging in direct action.

The outcome of a strike is unpredictable but labor strikes have immense potential. To be successful, striking workers require both internal and external support. West Virginia’s teachers were effective because they were united. Enough teachers in every county were willing to risk their livelihood to shut down schools across the state, without exception. They were supported by their communities, which recognized the importance of the strike and provided monetary and other support to workers who were unpaid during the strike.

While unions must rely on communities to successfully strike, unions provide substantial support to their communities through increased wages, resulting in tax revenue and lower reliance on public and private assistance. Importantly, though union members work to improve their communities, from the American Federation of Teachers partnership with First Book (which has provided nearly 5,000,000 books to educators, parents, and students) to UAW Local 862’s partnership with Toys for Tots (providing over 2,500 new bicycles to Louisville, Kentucky, children in 2018), unions support their communities in tangible, personal ways.

Tomorrow young people around the world will leave classrooms and take to the streets to join the Climate Strike, which is intended to bring visibility to the climate crisis immediately before the UN Climate Summit in New York City. It’s inspiring to see students use the power of a strike to try to save their planet and their future. Some businesses are closing in support of the strike and some school districts will allow students to miss school without penalty to attend.

This type of community support for youth activism is critical. At the same time, it’s important to recognize that this type of direct action differs from a labor strike in a way that alters its effectiveness. When workers strike, they deprive their employer of a necessary resource—their work—without which the company can’t function. They have the power, working collectively, to shut down an operation. The Climate Strike and other marches such as the March for Our Lives are missing this essential element. So, while they can certainly raise awareness and inform our elected officials of the strength of our positions on these issues, they must be followed by action that impacts the decision-makers. This may include voter registration and “get out the vote” efforts that bring young adults to the polls to replace politicians who don’t reflect their values; pressuring school districts to alter policies that are not environmentally friendly; and organizing boycotts of local companies that don’t work to implement green practices to address climate change.

You can support these activists by joining a local climate strike. But don’t let your support end tomorrow evening. To maximize the power of the strike, it is essential to provide support to students engaged in direct action in their communities, where they have the leverage to alter the status quo in a more immediate and tangible way. For more information on the Global Climate Strike, go here.