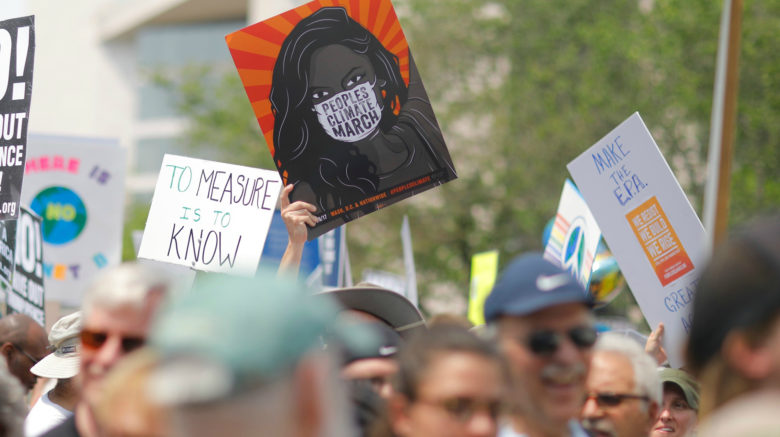 Last week the team at the American Humanist Association (AHA) launched the Humanist Environmental Response Effort (HERE) for Climate, a new initiative designed to empower nontheists and humanists to take real local action on the issue of climate change. HERE for Climate will raise awareness about how communities can make a difference and will connect local individuals and organizations with the resources they need to make an impact.

There’s no question that climate change is a humanist issue. Humanist Manifesto III, also known as Humanism and Its Aspirations, is the guiding document of humanism in general and the AHA in particular. It reminds us that “humanists are concerned for the wellbeing of all,” and that we each hold a “planetary duty to protect nature’s integrity, diversity, and beauty in a secure, sustainable manner.” We’re acting on that planetary duty now, before it’s too late.

There are a few components to this campaign. Right now, we’re working on developing increased support. We know that humanists feel compelled to act for the benefit of the larger community, and this is another avenue through which to do so. We’re asking members and non-members to learn more about climate change through reading, watching, participating, and more. Then, it’s time to take action. There are so many ways for you or your local community to engage on this critical issue. Attend an event or, even better, host one! AHA Grassroots Organizer Melody Stringer, is more than ready to answer your questions about how best to put your groups’ skills to work creating a better world together.

In the coming months the AHA will be placing advertisements in major markets and digital outlets around the country, encouraging folks to take action on climate change. These ads will also be made available (at no cost!) on the HERE for Climate website, allowing individuals and local groups to place them in their own local papers, create flyers for local events, and more. Be sure to keep an eye out!

Why is this all so important?

Climate change has wide-reaching implications. There are the more obvious ones: rising waters, ocean acidification, increasing rates and severity of natural disasters, and more. But our changing planet has additional large-scale implications —from the economy to politics to every other interconnected piece of our communities. “Climate change has played a significant part in deepening the extreme poverty and insecurity” that drives the ever-increasing rate of migration, according to a recent Washington Post article. Regions that rely on agriculture—either as large-scale industry or as subsistence—are among the most susceptible to the long-term effects of global warming. A rise in planetary temperature is one of the predominant drivers of the international refugee crisis, as people flee these no-longer-temperate locations. The impacts of these aren’t just limited to this global or national scale.

Notice your nose running more than usual? Even allergy season is being affected by rising planetary temperatures. Long-term airborne pollen data indicates “significant increases in both pollen loads and pollen season duration over time.” More pollen in the air every year, plus a longer allergy season each year, makes for some unhappy sufferers. While not as dramatic as the other massive impacts of climate change, this study demonstrates what we already suspected to be true: climate change is affecting each of us, from the personal to the global level.

While the time to make change may be running out, it’s not gone yet. Humanists must stand together in collective voice and action to make the world liveable. Curious about being HERE for Climate? Learn more about taking action on the campaign’s website! There are numerous ways individuals and groups can work to create positive change.

A personal favorite of mine is engaging my reading group. Whether digital or in-person, reading groups create a sense of security and vulnerability that allows for productive conversations. When bringing climate change conversations to the forefront of discussion, it’s not even necessary to read a full book. There are so many great articles and reports that can kick off these conversations. Be sure to come from a place of understanding and intent for a positive discussion. If your reading group is more inclined to like a robust book, I suggest Silent Spring, by Rachel Carson. This story, originally published in 1962, inspired much of the modern environmental movement, making it the perfect selection to prompt challenging or new conversations.

HERE for Climate will host a kickoff event next month in Minneapolis, Minnesota. On May 18, the Humanist Center for Education will present Climate Justice: A Better Future for Us All, a summit focused on global degradation. While these calamities affect us all, they affect people of color, the global poor, Indigenous populations, and other marginalized group more acutely. This free one-day seminar will feature national organizers, scientists, urban farmers, and more. If you can, please join us in these critical conversations, both in Minneapolis and beyond.